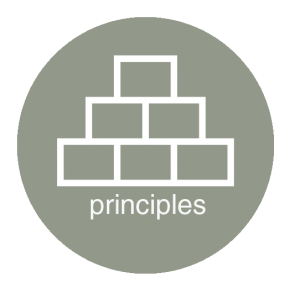 The first general principle –  Design out waste – states that when the components of a product are effectively designed to fit within biological or technical materials cycle and manufactured to allow for future easy disassembly and refurbishment, waste becomes inexistent. Biological materials are non-toxic and can be simply returned to the biosphere (through composting or other approaches) while technical materials are designed to be used again with minimal energy and highest quality retention (Braungart and McDonough, 2002).

The second principle – Build resilience through diversity- highlights that modularity, versatility, and adaptivity are the features that create resiliency (Benyus, 1997, Pauli 2010). Diversity however needs to be balanced with efficiency to result in an effective system: if on one side, most efficient systems have fewer nodes, fewer connections and greater throughput, they are however more vulnerable to the effects of shocks. On the other end of the spectrum, less efficient system have more nodes, more connections, more scales but prove to be more resilient when under external shocks. The second principle aims to seek effectiveness, a balanced spot where resilience and efficiency interplay.

In a circular economy, the third principle states that systems should ultimately aim to run on renewable sources (Braungart and McDonough 2002; Erkman, 2001). In practice, relying on renewable energy can only be achieved with a reduction of energy consumption.

The fourth principle – think in systems- is the ability to understand how parts influence one another within a whole, and the interrelationship of the whole on the parts. This principle is crucial in developing circular models (Pauli, 2010).  It includes considering elements in relationship with their infrastructure, their environment and their social contexts and involves understanding flows and stocks at stake.

In the fifth principle, we shift from a notion of waste – a material with no or little value, to a notion of a by-product, no longer directly useful to its last user but potentially a valuable resource for other actors in the system (Braungart and McDonough, 2002; Erkman, 2001). Biological materials (in the form of products or materials) are reintroduced into the biosphere, through non-toxic, restorative loops, while technical materials can be addressed in various ways: either through new high quality product creation (upcycle), or through a circulation of by-products within a network of businesses (industrial symbiosis).

The sixth principle – think in cascades- value creation for biological materials lies in the opportunity to extract additional value from products and materials by cascading them through other applications (Pauli, 2010).

Principle seven – think local – focuses on generating value with the resources already at hand. As ecosystems only make use of the resources at hand, sustainable businesses must do the same. This means taking advantage of underused resources, considering local resources and the full range of outputs produced (Benyus, 1997; Pauli, 2010). Organisations, projects and communities like natural ecosystems, are influenced by their local context. To take advantage of these local opportunities one must be willing to increase local participation and adapt to the local context.

Principle eight -focus on performance – achieve synergies by profitably exploiting the three objectives of value creation and job creation and resource consumption reduction by selling performance instead of goods (Stahel, 2010).