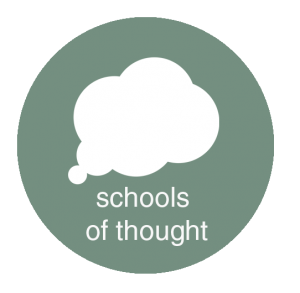 Biomimicry is another school of thought which has strongly influenced how the circular economy is currently understood. Biomimicry is an innovation method that seeks sustainable solutions by emulating nature’s patterns and strategies. The goal is to create products, processes, and policies that are well-adapted to life on earth over the long haul.

Scientist and author Janine Benyus popularized the term biomimicry in her 1997 book Biomimicry: Innovation Inspired by Nature.  The core idea is that nature has already solved many of the problems we are coping with. Animals, plants, and microbes can be seen as the consummate engineers. Benyus (1997) suggests shifting one’s perspective from learning about nature to learning from nature as a way to solve human problems. Studying a leaf to invent a better solar cell is an example.  The author distinguishes three guiding principles. Nature as model (1): biomimicry studies nature’s models and emulates these forms, processes, systems, and strategies to solve human problems. Nature as measure (2): biomimicry uses an ecological standard to judge the sustainability of innovations. Nature as mentor (3): biomimicry is a way of viewing and valuing nature. It introduces an era based not on what we can extract from the natural world, but what we can learn from it. Using an owl´s feather example, Benyus (1997) defines further three levels of biomimicry. The first level of biomimicry is the mimicking of natural form, for instance, mimicking the hooks and barbules of an owl’s feather to create a fabric that opens anywhere along its surface. Copying such feather design is just the beginning, because it may or may not yield something sustainable. Deeper biomimicry adds a second level, which is the mimicking of natural process, or how a thing is made. To keep the bird example, the owl feather self-assembles at body temperature without toxins or high pressures, by way of nature’s chemistry. In the industrial world, green chemistry attempts to mimic these types of approaches.  At the third level is the mimicking of natural ecosystems. The owl feather is part of a larger system —it’s a part of an owl that is part of a forest that is part of a biome that is part of a sustaining biosphere. In the same way, the owl-inspired manufactured fabric must be part of a larger economy that works to restore rather than deplete the Earth and its people. A bio-inspired fabric using green chemistry, but weaved by workers in a sweatshop, loading it onto pollution-spewing trucks, and shipping it long distances, will not be perceived as sustainable, concludes Benyus.

Practical nature-inspired solutions are plenty and have been collected by various biomimicry practitioners. In architecture, the Eastgate Building, an office complex in Harare, Zimbabwe, has an air conditioning system modelled on the self-cooling mounds of termites. It maintains the temperature inside their nest to within one degree, day and night (while the temperatures outside swing from 42 °C to 3 °C). In Japan, The Shinkansen Bullet Train, one of the fastest train in the world, was encountering strong noise issues as air pressure changes produced large thunder claps every time the train emerged from a tunnel. To address the issue causing residents one-quarter a mile away to complain, Eiji Nakatsu, train’s chief engineer and an avid bird-watcher, modelled the front-end of the train after the beak of kingfishers, which dive from the air into bodies of water with very little splash to catch fish. The bio-inspired solution resulted not only in a quieter train, but 15% less electricity use even while the train travels 10% faster. In the medical equipment sector, materials researchers and engineers at Kansai University in Japan saw amazing potential in mimicking the structure of the mosquito’s mouth to design a nicer needle. They used sophisticated engineering techniques that can carve out structures on the nanometre scale. The result was a needle that penetrates like a mosquito, using pressure to stabilize and painlessly glide into skin.  Based on the increasing amount of examples in which businesses learn from nature principles, the Biomimicry Guild and the Biomimicry Institute (both now Biomimicry 3.8) have studied, compiled, and distilled scientific research to create a collection of fundamental principles now known in biomimicry as Life’s Principles. Life’s Principles are intended to represent nature’s strategies for sustainability, that is, how life has sustained on earth for 3.85 billion years. By following the principles life uses, companies can create products and processes that are well adapted to life on earth.

While Benyus comes across quite strongly about the eco-friendly nature of biomimicry, this is not always how the practice of biomimicry unfolds (Marshall, 2009). The idea of mimicking nature has resulted in diverse implementations in which the sustainability credentials could be questioned:  emulating biological molecules, such as DNA, to create industrial nanomachines or inventing new military technologies based on all kinds of animals and plants are not necessarily bringing out the best in what nature can offer. Biomimicry can also be criticized for carrying out technocentric values, in which nature is utilized instrumentally for its resources (in particular as a supplier of useful information).  If biomimicry has not necessarily involved eco-friendly technological design, critics have argues the necessity to distinguish biomimicry from ecomimicry (Marshall, 2009), the latter being inherently sustainable from an environmental and social point of view.

Circular economy, as a framework for sustainability, works hand-in-hand with the biomimicry approach. The concept of a circular economy aims to emulate the cycles found in living systems. Both approaches prompt new ways of thinking and propose a radically different relationship with our world. Similarly, the Blue economy concept introduced in the next section aims to create value from nature inspiration.